City of Wolverhampton Council has awarded £100 to Nishkam Primary School Wolverhampton after its caretaker shopped a fly tipper for dumping waste on school grounds.

For a period of 6 weeks bagged waste was deliberately dumped outside Nishkam Primary School, based on Great Brickkiln Street, Wolverhampton.

Black bags filled with household waste, leftover food and nappies, were repeatedly thrown over the school gates, putting children’s health at risk and leaving Kevin to clear it up.

Kevin cleared the waste numerous times before opening the bagged waste, finding evidence of the person responsible and contacting the council.

Kevin said: “Part of my job is clearing litter from school grounds, making sure all areas are safe and clean for children and staff.

“It's understandable rubbish may get blown onto school grounds, but when it’s being done deliberately – it takes the mick.

“There are youngsters here that are learning all about anti-littering and they were walking into school to see someone had dumped rubbish on school property.

“Over the past few years, cleanliness in the area has been improving - it’s a shame there are selfish people out there that try to ruin it for the community by blighting the streets with rubbish.

“Since the report and the new anti-fly tipping signage has been installed, there hasn’t been any fly tipping on school property and I hope it stays that way.”

Councillor Steve Evans, Cabinet Member for City Environment at City of Wolverhampton Council said: “Fly tipping is a serious crime that will not be tolerated.

“To fly tip outside a school is absolutely disgusting. These lazy and selfish fly tippers are not only blighting the streets with litter but putting children’s health at risk.

“I would like to thank the caretaker for making the council aware of the person responsible and thank the team for bringing this culprit to justice.

“I hope this sends out a strong message, that we mean what we say – we are clamping down on fly tippers and when we catch you, there will be a price to pay.”

Following Kevin’s report to the council’s ‘Shop a tipper’ hotline, an investigation was carried out and the person admitted to dumping the waste and paid a Fixed Penalty Notice of £400.

The council awarded the school with the £100 Enjoy Wolverhampton gift card for the successful report. 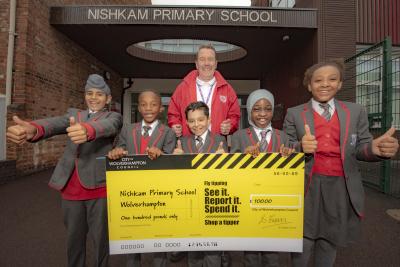 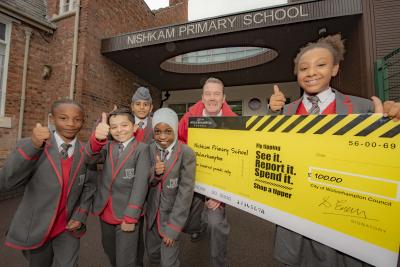