The first of 5,000 nextbikes have today arrived on City of Wolverhampton's streets as the region's first bike share scheme pilot gets underway.

25 bikes and 5 stations have been launched in Wolverhampton as part of a trial ahead of a full launch in the West Midlands later this year.

Mayor of Wolverhampton, Councillor Phil Page, West Midlands Mayor, Andy Street, and cycling legend, Hugh Porter MBE, were among the first to try out the bikes, along with volunteers who signed up to trial the landmark scheme.

5,000 bikes and hundreds of stations will eventually be installed across Birmingham, Wolverhampton, Coventry, Walsall, Sandwell, Dudley and Solihull.

It will be delivered and managed by global bike share leader nextbike, which operates more than 200 schemes worldwide.

nextbike has recruited volunteers to put the technology through its paces over the coming months. Wolverhampton's first docking stations are located outside the Civic Centre, at St Peter's Square; outside the new market, in Cleveland Street; outside Sainsbury's superstore on the Ring Road; outside St John's Retail Park, on the Ring Road; and outside The Way Youth Zone, on the Penn Road island.

Members of the public can hire the pilot bikes on a pay as you go basis.

The landmark scheme will eventually offer 5,000 bikes and docking stations across the region, along with 3 planned service and maintenance hubs.

It is expected to create 50 new jobs, including area managers, van drivers and mechanics.

Mayor of the West Midlands Andy Street said: "I am delighted to be here for the launch of the bike share trial in Wolverhampton City Centre.

"These are the first of thousands of nextbikes coming to the West Midlands which will give people an even greater choice in how to get around, especially in our major towns and cities.

"This is part of an ongoing revolution in public transport which is also seeing the development new Metro tram routes, opening of new rail stations and development of rapid bus services.

"Encouraging more people to cycle, and offering this bike share scheme is a key part of our plans to tackle pollution, congestion and improve health in the region."

Councillor Roger Lawrence, City of Wolverhampton Council Leader and WMCA's lead member for transport, said: "Cycling has a hugely important role to play in tackling issues such as congestion and pollution.

"If you look across Europe you'll find these schemes are in place in the vast majority of urban centres, and it is high time that the town and cities of the West Midlands were doing something similar.

"We are proud and delighted City of Wolverhampton has been chosen for the soft launch of Bikeshare and I would urge visitors to make the most of this fantastic scheme to help them get around the city."

A number of TfWM transport initiatives are already supporting healthy and active communities such as the introduction of half price travel for all young people undertaking an apprenticeship and traineeship.

The West Midlands Cycling Charter, launched in 2013, sets out a target of 5% cycle usage in the region and a commitment to improve cycling infrastructure and safety.

And TfWM's Health and Transport Strategy sets out how transport schemes can have a greater impact on people's health and wellbeing, particularly showing how street and place design can encourage more social contact and physical activity during travel, with significant health benefits.

Julian Scriven, nextbike UK chairman, said: "We're delighted to be getting our first bikes on the ground in the West Midlands. This is the most sophisticated bike share scheme in Britain which will dovetail with seven different towns and cities across the region. It will also be the most comprehensive bike share integration we have delivered to date and we're proud to be part of it.

"The pilot scheme in Wolverhampton will play an important part in ensuring that our technology is fully tested and integrated with all of the necessary platforms before hundreds of bikes are put onto the streets over the next 12 months."

When fully launched, it will be the UK's first bike share scheme to be integrated with a region wide smart ticketing system, and will be the largest of its kind outside of London.

Docking stations will be located around key sites in the towns and cities involved, with bikes available 24 hours a day.

Once the scheme is up and running, annual membership will cost from £30 per year, meaning riders can access the bikes for as little as 8p per day. 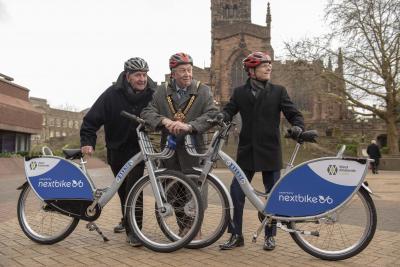 The launch at the Civic Centre 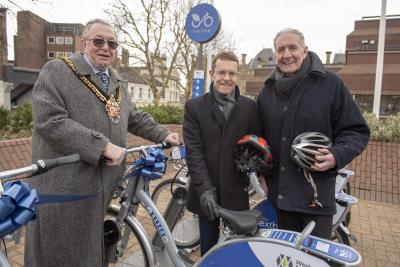 The first nextbikes have arrived today